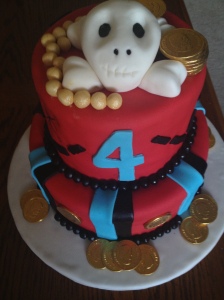 Yikes – it has been a while since my last post – since my last cake really, which was done more than 3 weeks ago.  Sorry for the neglect! I promise this summer when I am on hiatus from cake decorating that I will continue to post fun links, articles, or pictures of baking related awesomeness.  On to this week’s cake.  I created a pirate themed birthday cake for my ex-coworker’s sister’s 4 year old son…wow, say THAT five times fast… I made a cake for my friend’s nephew.  I’m pretty happy with how it turned out.  I was hoping for a bit more on the design side though – I was dreaming of a gum paste/fondant 3D fully functional treasure chest.  Not as easy as you might think – mostly because of the fact that while I was in a deep sleep dreaming of dancing cupcakes and dessert bars, the wind decided to plow through my window, knock over my fondant roller that sat on my cake table, and demolished the fantastic treasure chest lid I had worked on for over an hour. Needless to say, I was in no mood to remake it. Nonetheless I was able to come up with a different design that I feel worked out quite well.  I made a friendly looking skull for the topper and added some gold pearl dust covered fondant balls and a whole wack of chocolate loonies.

I started off by covering a 3-layer 8 inch cake and a 3-layer 6 inch cake with red fondant.  I added black and blue stripes to the bigger tier, and then stacked the cakes using dowel rods.  I added the loonies to the cake – I was going for the “treasure look” – using piping gel. Both tiers were surrounded by a black ball border.  I made the skull by simply kneading out a large ball of white fondant, and shaping it into a skull with my fingers.  I added the details with a black edible food writer. 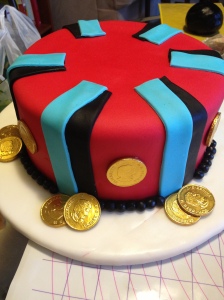 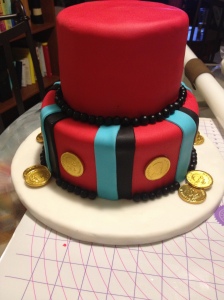 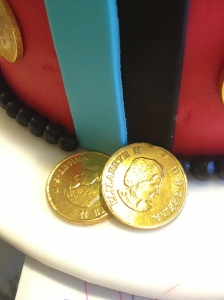 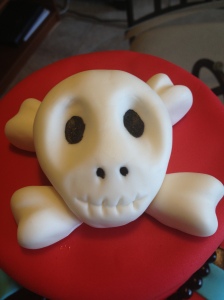 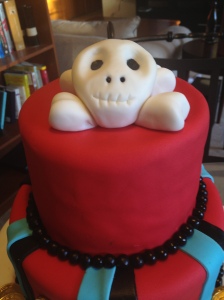 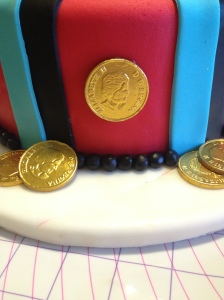 I added the rest of the decoartions after the skull was secured on the top of the cake.  The loonies and pearl dusted fondant balls were added, and then I began working on the top tier.  I created a treasure map sort of thing, with a small island at the back that had a palm tree and an X marks the spot detail.  I drew a compass on the cake using the food writer, and then added the “4” in the front.  And presto! There it is. 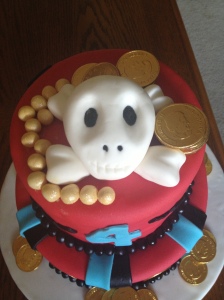 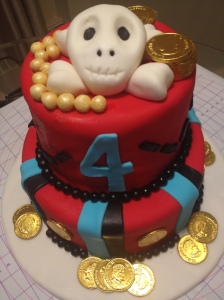 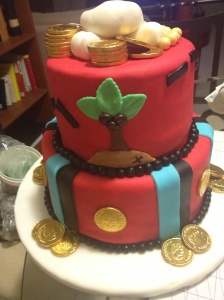 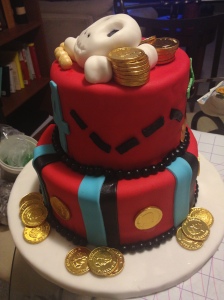 Pretty simple – I’m quite sad that my treasure chest didn’t turn out, but there’s always next time I suppose. I think my favourite part about this cake is the skull….because it’s super adorable. Next cake (and final one until the fall) is another bachelorette cake. Stay tuned. Happy Baking!!

So this week, instead of the usual dozen or two of cupcakes, I decided to focus on a cake! I graduated (yes graduated – there’s a certificate and everything, and it’s signed so you know it’s legit) from my Wilton cake decorating class, and for my Master cake I created a zebra print cake with a hot pink fondant bow and ball border.  My masterpiece was a 2 layer 9 inch cake, one layer was chocolate and the other french vanilla (sorry to disappoint but they were totally box cakes – scratch would have been too much and apparently doesn’t turn out as nice).  This is the third cake that I’ve ever made, and I must say it’s my favourite one so far.  This week, rather than cupcakes, I will again be focusing on creating a cake….I love February! So far I have 3 birthday cakes! My aunt loved the zebra print for her 50th…stay tuned for a NASCAR cake for my hunny’s dad!

Step one was to make the bow.  You can find the tutorial for creating fondant bows here. 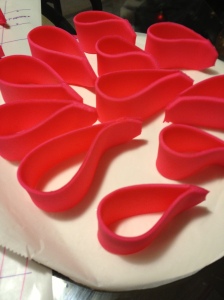 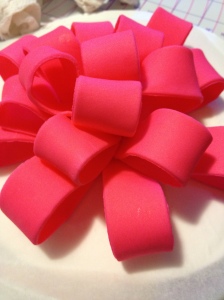 Then, after baking my cake and coating it with a layer of buttercream, I covered it with fondant.  Let me tell you, for some reason I had the worst. time. ever. baking this cake.  First, I’m stupid, and thought hmmmmmm. I wonder what would happen if I put the entire cake batter into one, nine inch pan.  Would that work? Of course… So ya I tried it.  It does not work.  Never do this. Ever.  The sides will burn and the inside will not cook.  Like at all.  Any idiot could have googled this.  But nope. I decided to try it out without any research…and it blew up in my face.  That’s the novice baker in me coming out.  Yikes.  So.  I learned my lesson, and tossed the cake, and decided to make a new one.  The second cake I made was properly separated into two individual nine inch pans. Yay Kelsey! Ou, except for some reason, once the cake was cooled, when I popped it out of the pan it just did not want to go….well, half of it didn’t.  So the cake split in half.  I was so angry.  One of the cakes turned out fine though.  Riddle me that my friends.  Anyways, hence the reason why one layer is chocolate and the other vanilla.  But no matter it tasted great. 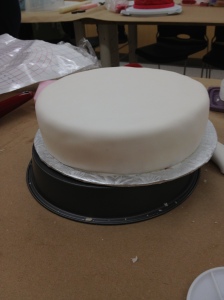 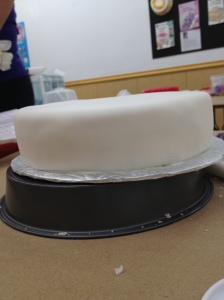 After covering the cake with fondant, I made the zebra stripes.  Tip:  BUY PRE-DYED BLACK FONDANT.  I kid you not my friends dying it black takes a lot of time, dye, and messy hands.  I rolled out the fondant as thin a possible, used my ribbon cutter to cut out 1-inch thick strips, and then cut those into triangle like strips.  I then glued them on the cake in an alternating pattern. 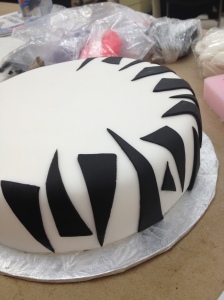 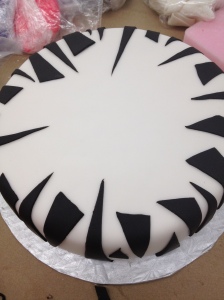 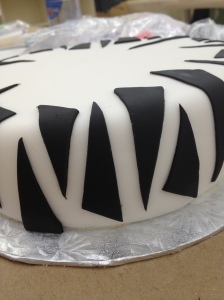 I placed the bow on top, and then created the ball border.  Basically the border is fondant balls glued on to the edge of the cake.  I used a medium sized Wilton circle cutout to cut out a bunch of circles of the same size.  I cut those in half and then rolled each half into a ball. 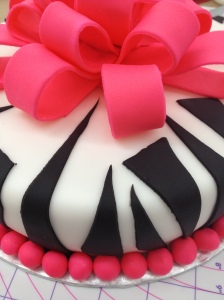 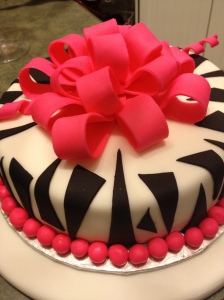 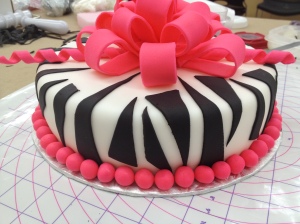 And there you have it!  My Aunty was so happy she cried.  I’m so proud. Happy decorating!  FYI – If you want a cake done I will be happy to make it for you so I can have more additions to my portfolio, and I will only charge you cost.  Keep that in mind if you live in my area! 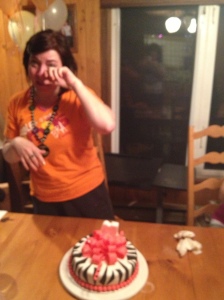 There was an error retrieving images from Instagram. An attempt will be remade in a few minutes.

Let's save a life folks. Join the fight. Spread the Word. Find a Bone Marrow Donor Match. Because, let's face it, cancer sucks.

Look what the cat dragged in @ The Kosplay Kitten's Playground

Foodie In The Making
Don Charisma

because anything is possible with Charisma

The Jill of all Trades

"...To thine own self be true, and it must follow, as the night the day, thou canst not then be false to any man." - Hamlet, Shakespeare

The no. 1 place for all your DIY & Hardware gift ideas

Thought Catalog is a digital youth culture magazine dedicated to your stories and ideas.